THAT IN SOME RESPECTS THE PRESENT DAYS MAY BE
DISTINGUISHED AS THE BETTER NEW TIMES.

EDINBURGH:
PRINTED BY THE CALEDONIAN PRESS,
"The Scottish National Institution for Promoting the Employment of Women in the
Art of Printing,

A RANDOM NOTE ON THE GOOD OLD TIMES. 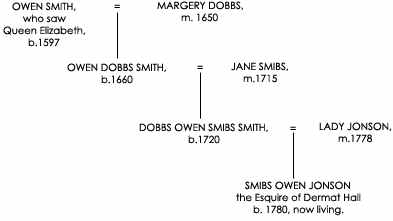 At such a play, my father took me with him, and made me stand between his legs, as he sate upon one of the benches, where we saw and heard very well. The play was called The Cradle of Security, wherein was personated a king or some great prince, with his courtiers of several kinds, among which three ladies were in special grace with him; and they, keeping him in delights and pleasures, drew him from his graver counsellors, hearing of sermons, and listening to good councell and admonitions, that in the end they got him to lye down in a cradle upon the stage, where these three ladies, joyning in a sweet song, rocked him asleepe, that he snorted againe; and in the mean time closely conveyed under the cloaths wherewithall he was covered, a vizard, like a swines snout, upon his face, with three wire chains fastened thereunto, the other end whereof being holden severally by those three ladies; who fall to singing againe, and then discovered his face that the spectators might see how they had transformed him, going on with their singing. Whilst all this was acting, there came forth of another doore at the farthest end of the stage, two old men; the one in blew, with a serjeant at armes, his mace on his shoulder; the other in red, with a drawn sword in his hand, and leaning with the other hand upon the others shoulder; and so they went along with a soft pace round about by the skirt of the stage, till at last they came to the cradle, when all the court was in the greatest jollity; and then the foremost old man with his mace stroke a fearfull blow upon the cradle; wherewith all the courtiers, with the three ladies, and the vizard, all vanished; and the desolate prince starting up bare-faced, and finding himself thus sent for to judgement, made a lamentable complaint of his miserable case, and so was carried away by wicked spirits. This prince did personate in the moral, the wicked of the world; the three ladies, pride, covetousness, and luxury; the two old men, the end of the world and the last judgement. This sight made such an impression in me, that when I came towards man's estate, it was as fresh in my memory as if I had seen it newly acted.

This account is curious, and deserves a careful perusal as the most graphic description in existence of the performance of an English play at the time when Shakespeare was a boy, and no doubt witnessed similar representations in his native town. There was clearly no scenery; the exigencies of that were supplied by the name of the locality of the scene / p.10 / written in a conspicuous manner in the background of the stage: all the rest was left to imagination. "Now," observes Sir Philip Sydney, writing about the year 1583, "you shall have three ladies walk to gather flowers, and then we must believe the stage to be a garden. By and by we hear news of shipwreck in the same place; then we are to blame if we accept it not for a rock. Upon the back of that comes out a hideous monster with fire and smoke, and then the miserable beholders are bound to take it for a cave; while, in the meantime, two armies fly in, represented with four swords and bucklers, and then what hard heart will not receive it for a pitched field?" Great progress, however, had been made in the invention of the diversity of characters and incidents. Two or three years ago, people roared at a pantomime at the Princess's, in which the actors were introduced as birds. They thought it a striking and a modern novelty; but a similar performance had taken place in the reign of Queen Bess. I had forgotten all about it, until the other day, looking into a rare little work, called Beware the Cat, printed in 1584, I read of the publisher of it having a controversy with one Mr. Stremer, "whether birds and beasts had reason; the occasion thereof was this. I had heard that the King's players were learning a play of Æsop's Crow, wherein the most part of the actors were birds, the device whereof I discommended." We are certainly better off now in the matters of composites, lucifers, and gas; but you see that they had plenty of invention at that early period. And as for comic actors, you should only have seen Tarlton, when he came on the primitive stage in the back-yard of the Red Bull. Liston was not fit to hold a candle to him, although the mere sight of the countenance of either sufficed to convulse an audience. But Tarlton was the man for my money; and, like the late Mr. Wright of the Adelphi, he used to put in jokes of his own, and at times talk to the audience. His jokes are very unlike those in Punch at the present day, and still more dissimilar to the word-playing of the new-born extravaganza. Tarlton would never have acted in one of the latter. He would never have understood why the spectators were set in a roar when Jack, having told the Giant he might "go to Bath," the latter exclaimed that his impudence "did make his hair to Bristol." Tarlton's audience would not have appreciated such a sorry jest as that. His witticisms were of a more solid kind; but I can tell you that we, in the balcony, used to laugh at them until the tears came into our eyes.
I have a note of only one of them, and that not uttered in London, but in the country. Here it is from a book of the time, there called Tarlton's jest of a gridiron. "While the Queen's players lay in Worcester city to get money, it was his custom for to sing extempore of themes given him. Now, one fellow of the city, amongst the rest, that seemed quaint of conceit to lead other youths with his fine wit, gave out that the next day he would give him a theme to put him to a non-plus. Divers of his friends, acquainted with the same, expected some rare conceit. / p.11 / Well, the next day came, and my gallant gave him his invention in two lines, which was this --

The people laughed at this, thinking his wit knew no answer thereunto, which angered Tarlton exceedingly; and presently with a smile, looking about, when they expected wonders, he put it off thus --


The people hooted for joy to see the theme-giver dashed; but such commendations Tarlton got, that he supped with the bailiff that night, where my themer durst not come, although he were sent for, so much was he vexed at that unlooked for answer." It would take a little more ingenuity, now-a-days, to obtain so honourable an invitation; but these were in the good old times, when a small quantity of wit went a very long way.
Poor Tarlton used to get wretchedly tipsy; but he was such a genial popular fellow, everybody overlooked the failing. The worst of it was that it killed him, but the people kept his memory alive for years and years. Two centuries after his death, there was an inn in the suburbs of London, then called the Tarlton, and perhaps there it is still. Men put his picture upon signs, and his image upon tokens. The figure of Tarlton, with his tabor and pipe, was as familiar to the public as that of Queen Elizabeth in her ruff. I should like to know what actor of the present day would be similarly honoured. Poor Albert Smith, after amusing the public for years, and killing himself with a continuous endeavour to keep good faith with them, sunk to his grave, and appears to be already forgotten, excepting by a few personal friends, and by a small number of his audience, who, like myself, esteemed him less for his drollery, than for his services towards the suppression of stupid conventionalities. Both these entertainers died prematurely, and almost suddenly. Tarlton was busy in his vocation until a few days before his death. Two of the most amused hours of my life I had spent on a Wednesday with my daughter at the Egyptian Hall, just opposite that never-to-be-forgotten door, where used to enter the unrivalled personificator of the old stoker. It was with an odd and unaccountable presentiment, that I seemed to feel that I should never see him again; little thinking, however, that the end was so near. Before had arrived the Wednesday following that on which we had witnessed his gibes and his merriments, he was not only dead but in his grave. Ye public, cherish the memory of the few who can harmlessly charm away sadness from the sad, and appreciate them well during the time that they are with you. They deserve a better fate than is usually accorded to them. In this particular, at least, if not in the matter of candles, we can creditably follow the example of the "good old times".